Although I’ve noticed a continuing decline in various bees and bugs over the past decade, this year the difference seems more drastic.

Even in late spring when blueberry bushes were in full bloom I didn’t think I was going to have any bees to pollinate.  Finally a few showed up, but it seems to me that one bee was doing the work of what is usually dozens of bees do.

Usually I have two major “search and destroy” time periods for potato beetles during the growing season.

The first beetles come at the beginning of the season just after the plants emerge – usually about May. It’s my guess those over-wintered in the garden.  There are usually not many and it only takes a few days of checking plants to get rid of first-comers and any eggs they’ve laid.

Then I have a few weeks of peace without the beetles.

After that I start finding them again.  Then, as long as I check plants daily or at least every other day it keeps the numbers easily controllable.  After a couple or 3 weeks the numbers diminish to the point that sometimes I forget to keep an eye on them.

If that happens I might come across a plant covered with larvae.That wakes me up to remembering it’s necessary to at least glance over the plants every other day. Otherwise the beetles can get out of hand  quickly.

This Year Was Not the Usual Scenario

Beetles kept showing up all summer. And I  know I missed some.  So that makes extra duty next year when they first show up.

Hopefully being diligent about checking each day at the beginning of next season will allow me to get back to enjoying only minimum numbers.

The occasional stink bug is bad enough!  But this year every day’s garden check included longer  “search and destroy” missions for stink bugs on tomatoes and peppers. And it continues still.

The leaf footed bug —in the stink bug family – also made more of an appearance this year. I killed one to five at least every two or three days. They’re a lot faster moving than regular stink bugs and harder to catch. 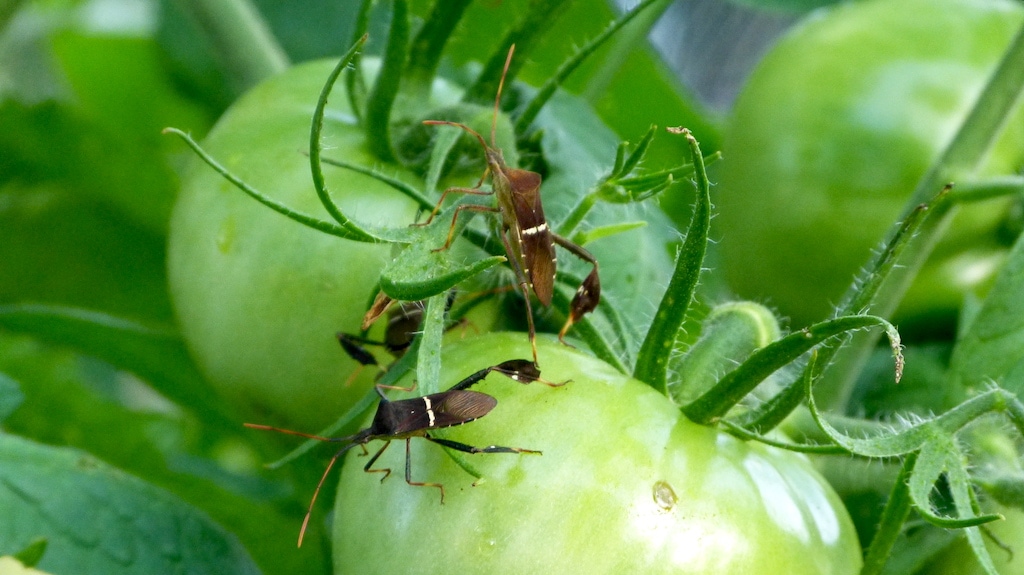 Other Unwanted Bugs that Usually Show Up but Didn’t:

Cucumber beetles – I was delighted not to have these around.

Squash bugs (I didn’t grow squash in the garden, but some usually find the cukes.)

Many Predators of the Bad Bugs were Missing:

I didn’t see any praying mantis although their egg cases were plentiful in the garden.

No lady bugs.  They prey on aphids and other soft bodied bad guys.

Some of the usual spiders were missing. Not one of those large yellow spiders with the big webs that were so plentiful some years back were to be found.

The most visible sign of the Braconid wasp is seeing its white larvae feeding on a by-that-time disabled tomato horn worm. Only saw one small tomato horn worm this year. Fortunately that had the larvae on it. For more information on this little wasp see this post.

Then there’s the Tachinid fly whose larvae feeds on various soft-bodied insects. Caterpillars, young soft-bodied stink bugs, and potato beetles are included. But from all the indications being described (like the number of stink bugs), I don’t think there were many Tachinid flies around. But I thought I saw several at the beginning of the season.

Wasps are great hunters and I’ve seen them carry off many a potato beetle larvae to feed their young as well as other pest insects. Love watching them up close. They’re amazing and don’t mind my gaze at all. But  I didn’t see one wasp in the garden this entire season until the other day.

Bees Disappeared Totally at the End of August.

Further cause for alarm was that as we entered into August the bees (already few in number) totally disappeared.

Sedum and summer poinsettia by the end of August is usually covered with hundreds of numerous varieties of bees, wasps, butterflies and a few bugs as well. I grow lots of these plants through out the property mainly for the bees and wasps.

This year not ONE wasp or bee was to be found from the last two weeks in August  – until 3 days ago (Sept 9) one bee showed up. Each day has added another bee and I finally saw a wasp on the poinsettia.  Where are my hundreds of bees and dozens of wasps? 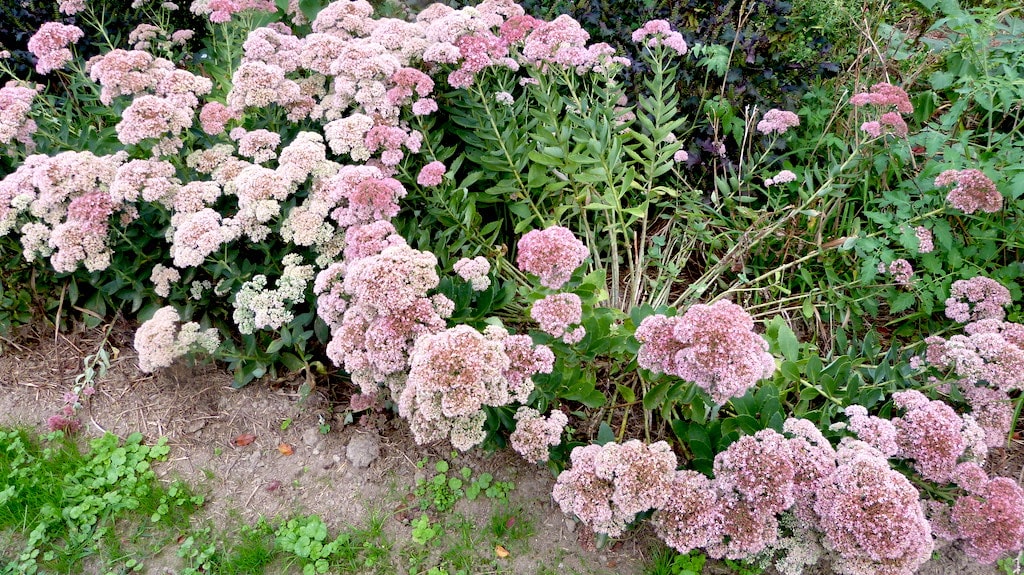 Sedum on Sept 10 – Sedums are usually swarming with bees, wasps, and butterflies from the time they start to bloom in mid August until they finally end their bloom 6 to 8 weeks later. No wasps, bees and  bugs to be found as of Sept 10th.

My Best Guess about the Cause

Somebody somewhere has to been spraying something.

I try to provide as much protection and food for the bees, wasps, and other predators as I can.  But it is evident that something was done somewhere to adversely affect them.

For a while I didn’t think any were going to show up again.  I was thrilled to see even one because it gave me hope for their making a comeback.

The Genius of the Creation

Nature provides so much and makes things so easy,  It amazes me how over the past 120 years especially – the majority has been deceived  into thinking that nature needs our help —and with chemicals and poisons no less!

Actually, just the opposite is true.  We need her help.  And she willingly provides it when given the chance.

But that’s what happens when we take for granted that everything  told to us and promoted to us is true.  Or think — “well that’s the modern way.”

Anytime we put what’s important to our life in the hands of someone else rather than thinking for ourselves — it’s most likely not in our best interest.

Why Things are “Made” Complicated

Most things like gardening, how to stay healthy, how heal, etc. is made complicated only for the money it puts in the pocket of big companies.

Fortunately the truth is still out there. You might have to look around a bit for it. But it can be found.

This website is a good place to start your search. You can find lots of helpful truths right here on Tending My Garden.

How are the bees, wasps, beneficials, and pest bugs doing in your garden this year?