This year I have more beans in my garden than ever. Along with the opportunity for more beans, more diversity, and a greater chance for success — comes more of a possibility for common diseases that attack beans.

That’s one of the reasons that I usually test grow a small amount of a vegetable before I grow a lot of it.  That way — should problems arise — I can deal with it on small scale to see if I even want to deal with it on a larger scale.

Until last week all the  beans looked green and lush and free from any potential problem. The plantings that are heavy with beans (I succession plant beans numerous times) are starting to show signs of what I think are two common bacterial diseases.

The good side of that is:  my beans were in the peak of health while they were developing beans and therefore, this small decline in their health should not effect the amount of harvest by more than a bean or two.

Causes and catalysts of disease over which we have no control:

There’s not much we can do about weather conditions.  But we still have a big advantage over conventional gardeners because we’ve worked with nature and many things are already in place to help control the outbreak of these diseases.

If you’ve checked out bean diseases you know there are lots of them.  But if you’re an organic gardener who has been working with nature a few years, have applied her principles, and have consistently improved your soil through the addition of organic material  —- you’ve also discovered that you don’t have and never will have the vast majority of those diseases.

Things that increase the chances of disease are corrected automatically when working with nature. 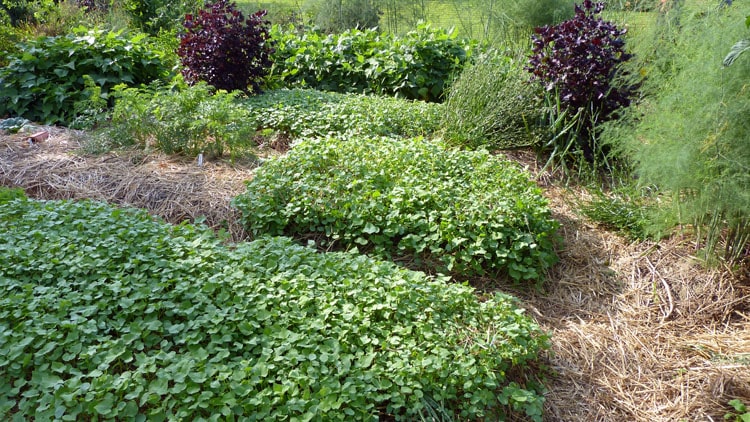 This picture was taken in early August. The Provider snap beans at the top center have been in the garden since June.  The ones at the top left are one of the small patches of pinto beans that I’m testing this year. 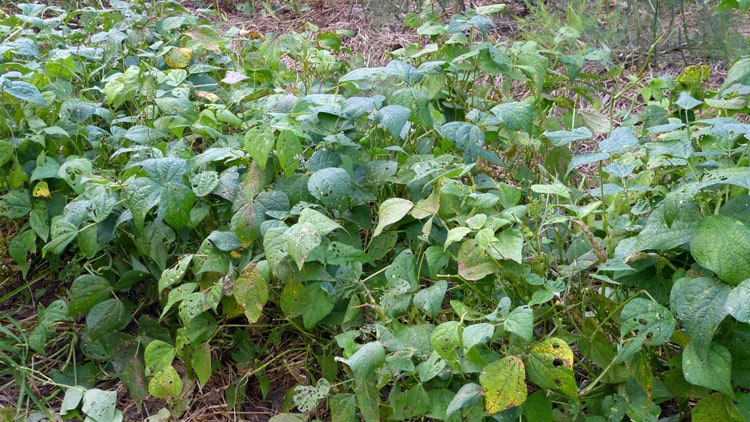 These are the same Provider snap beans  shown at the top of the picture above this one, but on August 30th. They’ve been in the garden since early June and I’m still picking every other day.  I don’t feel too badly about their having a few blighted leaves. 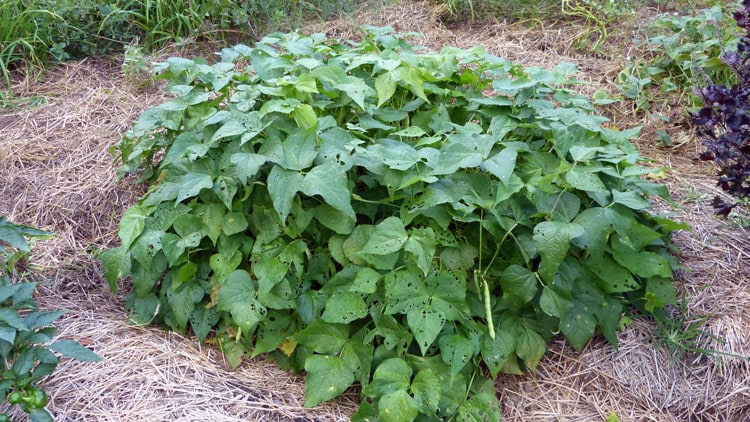 These is the same test patch of pinto beans shown at the top left of the first picture above, but on August 30th. These beans are heavy with full pods and are just starting to show problems on the leaves.

Prevention is the best control of ANY disease. Here are other things that we can do to help prevent disease from destroying our harvest of beans.

I’m testing two kinds of beans to use as dried beans for winter: Taylor Dwarf Horticultural Shell Bean and Agate Pinto Bean.  I’m having more disease problem with one than the other (can’t find my marker  – so can’t tell you which one).  If I have as much or more problem with these beans when planting from my seed next year —- I’ll never plant them again.

Some varieties are more susceptible to bacterial or fungal diseases than others.  When you can choose varieties with tolerance and resistance to diseases in your area do so.  If you grow a variety and have a lot of trouble with it — it might be time to look for another variety. 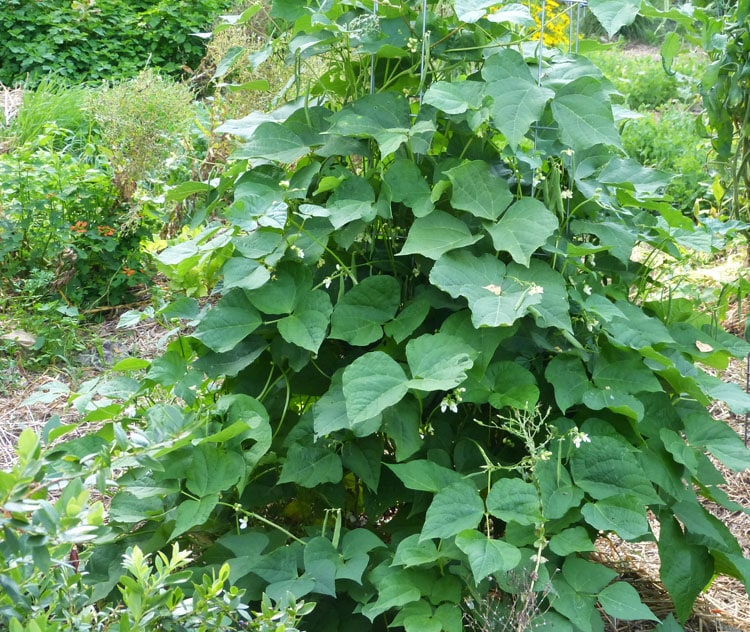 One of my test patches of pinto beans in early August. 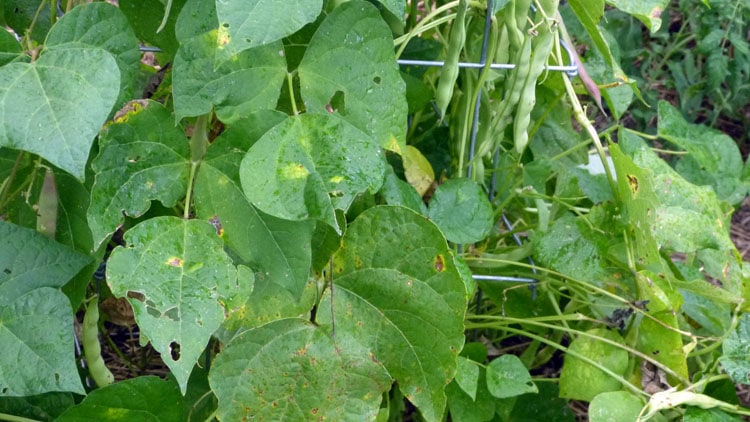 The same beans as in the picture above this one but on August 30th. Shown are signs of one of the blights common to beans. They are loaded with almost mature beans. If I had a sheltered place to hang these beans, I’d be temped to pull them up and hang them by the roots to finish maturing.  That way I could keep more of the infected residue out of the garden.

Just For Your Information 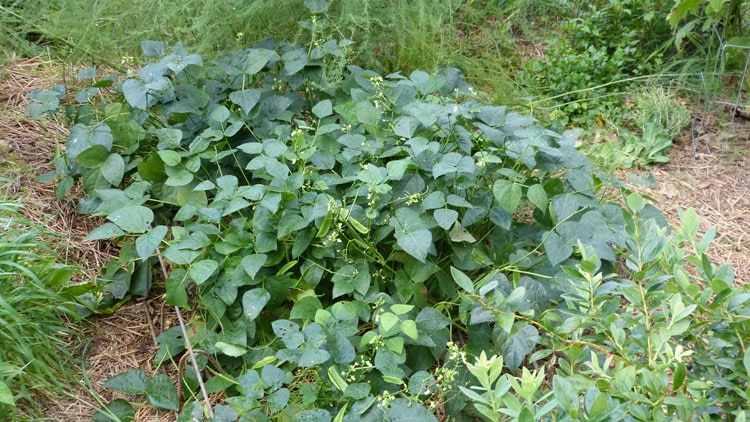 These were the first of 4 plantings of Henderson lima beans and on August 30 they are showing very little rust or yellowing of leaves. They are loaded with limas and we’ve already had two meals from them.

My take on pinpointing the exact name for a disease:

In my early years of gardening I wasted lots of time trying to pinpoint the exact name for this or that spot on a leaf.  I think most gardeners in this day and age feel the urge to do that. But I refuse to allow myself to give into that. I take an approach to disease that I feel is a much more constructive approach and better use of time.

When you consider the information I’ve outlined above and realize that a relatively small number of conditions set the parameter for the causes (and spread) of all of the many diseases possible, you might agree that your time will be best used in working towards preventing the diseases next year — rather than worrying about the exact name of this year’s problem.

Organic Gardening is easy, effective and efficient — and it’s a lot healthier.