It’s apple season and those shiny red delicious apples in the stores remind me of the beautiful apple the wicked queen gave to Snow White. It’s been many years (at least 30) since I have eaten an apple out of the grocery store  —-or almost any fruit for that matter.  It’s a shame that some of the most delicious food on earth is covered or saturated with poisons by the time they are available to the masses through the grocery stores.

Fortunately, I know of a good source for great apples —Golden Acres Orchard. Their Winesaps and Yorks are our favorites, although they offer Red Delicious and Golden Delicious as well.  In addition they have great Apple Juice and Vinegar.  (I’ve seen and purchased the Apple Juice at Good Foods Grocery in Richmond.  It’s the best!)

It’s been so many years ago, I can’t remember how I heard about Golden Acres Orchard in Front Royal, Virginia.  The orchard’s founder was A.P. Thomson who died in 1986.  Mrs. Thomson and her son, John, now run the Orchard and “strive to keep A.P.’s spirit alive” by the way they care for their apples. 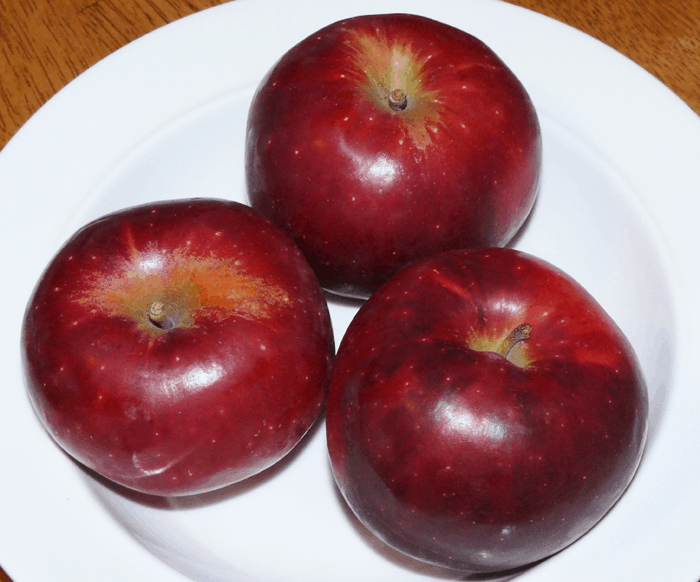 I’ve just received my of Winesap apples from Golden Acres Orchard. They are beautiful and healthful.

What are these biologically grown apples?

An important part of their story is told in most of their yearly letters to customers, so I’ll quote:

Mr. Thomson (1910-1986) “—-sought a better way to raise apples through soil fertility and understanding the interconnections of nature.  He believed people should not harm themselves or the environment in the process of growing food, and that we should constantly strive to minimize our disturbance of the ecosystem.  He avoided commonly used fruit-dip preservative chemicals which cannot be washed-off. ”

He “built the soil with cover crops, propagated earthworms, applied a variety of mineral powders, composted and applied liquid seaweed, a practice that is still an annual tradition —.”

“—50 to 60 years ago, it was common for the now-banned Endrin to be sprayed on orchard floors to kill mice.  The chemical was absorbed through their feet. (And it follows, that it was absorbed by the trees.)  As an alternative, A.P. hand-baited with biodegradable bait, used rock mulch around the base of the trees, and mowed under every tree with a push-lawnmower to discourage mouse habitat.”

As a tiny orchard, they struggle to survive and face many seemingly insurmountable challenges.  Even getting dependable help to harvest and pack is difficult and this year Mrs. Thomson packed all the orders for shipment herself with only one helper.

I’ve never met Mrs. Thomson or John in person; only talked to Mrs. Thomson on the phone numerous times.  She a lovely lady with old fashion values ———so we have a lot in common.  I consider her a friend.

You won’t find a website for these folks.  An online search might produce their orchard name and address and that’s about it.  They’re tiny, but they’ve been in business 64 years!  Just everyday folks trying to make an honest living by carrying on the tradition of the one who started it all back in the 1945 – A.P. Thomson.

They’re folks and apples you can feel good about.