Nothing in nature is written in stone. The best we can do is come to a conclusion about what generally happens with whatever thing we’re talking about or dealing with.

As with most critters, seeing one means two or more.  At least it will eventually. And unless a predator is around to keep the numbers under control, it’s likely you might have a problem if you have a garden that’s not protected. And sometimes, they get in in spite of the fencing.

I’ve had many experiences to back up what “usually” happens.  But I’ve also had plenty of experiences that fall into the abnormal or unusual category.

In Our First Garden

I’ve never ceased to be amazed that our first garden was never fenced.

The entire acre was almost all garden except where the old house was.

We had wildlife in abundance that is usually synonymous with trouble when it comes to a garden. Deer, wild turkey, rabbits, raccoons, and/or squirrels are all well known for causing problems for gardeners.

But oddly enough, for years we NEVER had problems.  Until finally one year I went out to pick the most beautiful crop of green beans I’d ever had and a rabbit (or rabbits) had eaten every one.  We declared war that very day, but never had any more trouble.

At our current home Bill put a fence up within 6 months;  primarily to keep out dogs that neighbors allowed to roam.

Since the fence was plastic netting, rabbits could bite through it and walk in at their leisure. So two foot wire fencing all around the bottom (6 inches buried in the ground) was required.

In spite of that necessary precaution 5 tiny baby rabbits got in one year.

My antics in trying to get them out would have made a great cartoon.

Another time an adult got in during the growing season and lived in the garden for months before it disappeared as suddenly as it had appeared. I never figured out how it got in or out.

Never bothered any of my food crops.  The wild delicacies that I allow to grow in the garden  evidently were much more to his liking.

My Most Recent Unusual Story

The month was probably April or May of last year (2021). I was working in a small island bed behind the garden where I had piled straw a few weeks prior to be readily available when more mulch was needed.

A tiny rabbit hopped out of the straw and hid a few feet away in the border behind the garden.

My guess is that a rabbit had made a nest in the straw and had her kits (babies) there. But I didn’t see any other little ones around. Five to seven is said to be the average litter. But the number can vary from one to fifteen.

As the days passed he made his way around the garden to the entrance side. That’s usually where I saw him back then.

Almost everyday he’d feed in this same area between the shed and the front of the garden.

He was never very big but he was growing.

Getting into the Shed

One morning I noticed something was digging around the old shed and had hollowed out a small entrance hole.  Further observation revealed it was this little guy.

I filled in the hole and blocked it.

Next night he dug another.

Blocked it and any other place he could dig.

He was still with me through the fall and winter; seemingly always staying on this property.

One cold morning at daybreak after harvesting some pine needles from a tree on the property line (to make a tea) I turned around and almost stepped on Bunny.

What a surprise. As unbelievable as it seemed, it was as if he came to say hello.

I talked to him for a few minutes and then went inside.

Another day while hanging clothes on the line I heard a scuffling to the right of me.  Much to my surprise it was the bunny running straight for me.  He stopped about 4 feet away and I talked to him.

Bunny was feeding as usual when I went to the garden one day.  Always talked to him for a minute or so before continuing my chores.

Took some row fabric in to cover something in anticipation of below freezing temps that night. Since what was being covered was only a few feet from the gate I didn’t close the gate. As I returned to leave garden, bunny was  right there at my feet.  Again – it couldn’t be — but it seemed his intention had been to follow me in.

He was not seeking food since everything he loved was among the wild grasses and plants in the yard.

By now we spent time communicating every day.

After planting some seed one morning I headed for the rainwater-buckets behind the shed to fill my watering can.

Turning around to go back to the garden, there was Bunny looking up at me.

By mid-April he was with me a lot when I was outside.  But you can imagine my surprise when one day he followed me to the house after I finished chores.

The only time I ever saw him go in the front yard is when he followed one day as I edged the fence border.

When grass cutting time started in mid April the delicacies he liked were cut too short. So, he’d feed in the meadow adjoining our back meadow for two days until the grasses grew again on this property.

Was it a Game?

If I didn’t see him when  first going outside  I’d call him — using the same tone used for our communications.

If he didn’t appear I’d go about my chores.

Many times, I’d turn around and there he was right behind me.  Looking at me.

He “seemed” to enjoy this especially when I was at the straw or the rain buckets.

The path between the lower end of the garden and the side border is only wide enough to accommodate what I call my speedster.  It has wheels and a seat that I use to carry my basket of supplies.

Working in that area and then having to proceed to the back meadow is something that apparently annoyed Bunny IF he had to move so I could get by.  One day he didn’t want to move and I hated to be pushy but I really needed to get by. The look he gave me was definitely one of annoyance!

Often Bunny followed me when I worked in the back meadow.

I was fortunate to have the camera with me one beautiful April day.  Bunny grazed as I worked.

After he had his fill he enjoyed basking in the sun. I took advantage of that time to continue our chats — even though they were a bit one sided as you have guessed.

A rabbit that is on high alert will have almost perfectly round eyes.  As you can see in the picture below when content and relaxed the eyes close more. 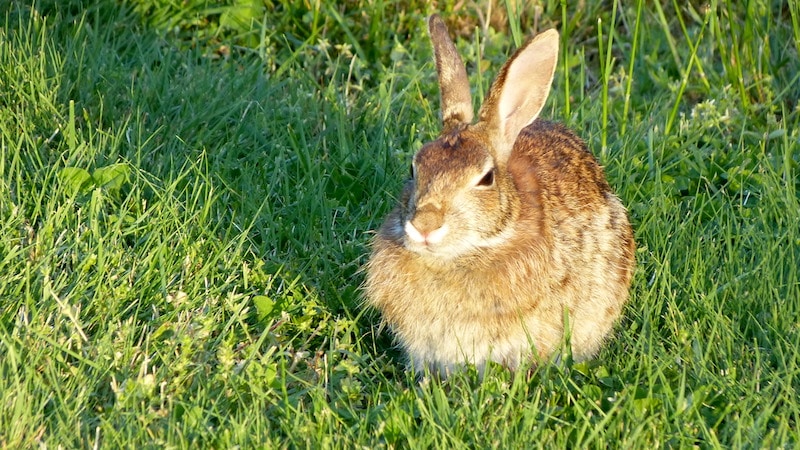 Above is bunny seemingly enjoying our conversation although a bit one sided. 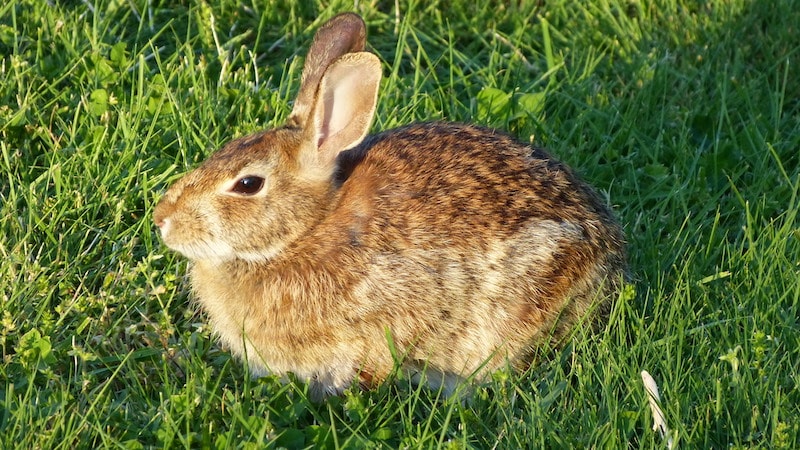 The day was cool, but the sun felt wonderful.

Until the last few years, we’ve always had a number of rabbits show up in the yard. Most of time the numbers are manageable, but in some years they were too many.

Since Bunny’s been with me, I’ve never seen any rabbits around.  But it’s a fact that where there is one there will be two.

Working in the upper end of the garden one day the first part of April I saw two rabbits chasing each other around on the far side of my neighbor’s property.

Bunny was not around that day.  It was a good assumption that he was one of the two rabbits I had seen.

He was almost a year old and that’s how rabbits act before mating.

When bunny and I first saw each other after that, he seemed more skiddish than usual. After we communicated for a few minutes he’d settle down and become more relaxed. 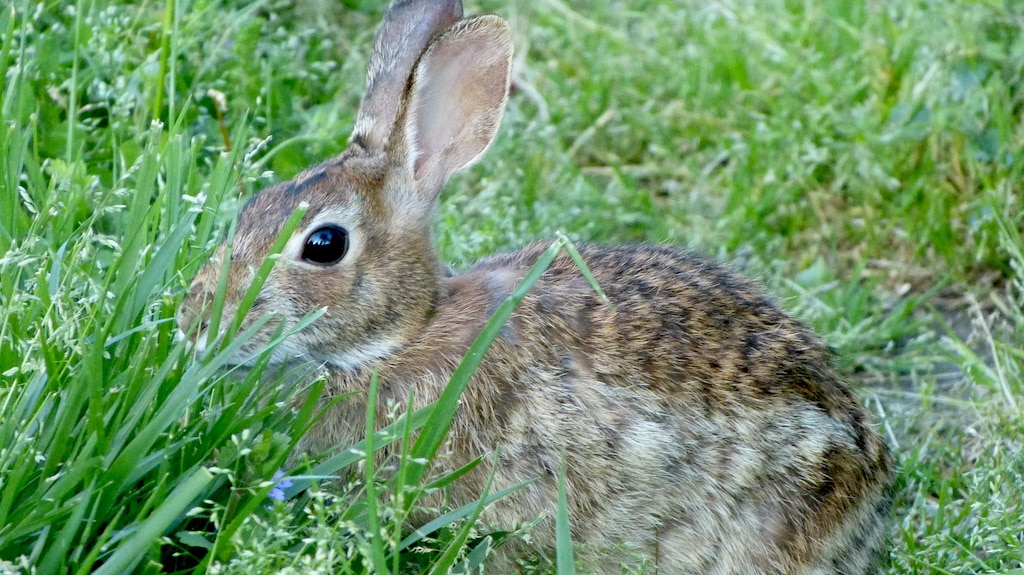 Bunny on alert. Note the eyes and how they differ from the previous pictures.

A Happening I will Never Forget.

While working in the small border outside our sunroom on the 19th of May, I was surprised that Bunny came right up to me carrying a mouth full of grass.  After pausing to look up at me, the grass was carefully placed in the vines a few feet away.

Bunny left and gathered more grass from another part of the border and came back to continue building a nest.

This is when I realized Bunny was a “she”!

Wild rabbits usually take great pains to hide their nests.  That’s one of the reasons I could hardly believe what I was witnessing.

She made a few more trips and we chatted a bit.

Suddenly she heard something in the tall grass and debris of the neighbor’s property a few yards away.

She didn’t run but went quickly into that area without ever looking back.

Rabbits have their young soon after making their nest.  They stay away from the young except to nurse once a day (sometimes twice). That’s supposedly a precautionary measure to keep the nest hidden.

For four days I checked the nest area.  Nothing.

Everyday for two weeks I called her. But I never saw bunny again.

Have a couple of theories about what happened, but I’ll never know for sure.

Can’t believe how empty this acre seems without her and how much I miss her company.

If you enjoyed this post you might also enjoy Before My Garden, A Dog Story if you’ve not already read it.