Welcome to the new readers who have subscribed to TMG this year. Hopefully, you’ve searched the site and found an abundance of information to help you become more successful in the garden. If you don’t find what you need, feel free to email me with questions. Growing food is an important part of being able to take care of yourself and I want you to have that skill.

To the many friends and readers of TMG who have left comments on previous posts and have sent emails expressing concern for Bill and me during this difficult time — we’re so grateful to you. We’ve derived strength and encouragement from reading and re-reading your messages of care and loving concern.

In January of this year, when I first alerted you (here) that Bill and I were facing a major challenge, I also promised to share more details when the situation was not so emotionally charged. Although we are far from finished with the challenge, now is the time for that update.

My intent is not to “air my troubles” — (as my friend and reader Jack from New Jersey might call it), but to encourage you to walk in the direction you want to go – no matter what your situation may be.

Many of you have guessed correctly that our challenge is a health issue.

For about a decade Bill has been dealing with some health issues that we’d managed to keep under control.  This past year things escalated and he’s been and is very ill. The illness has only been visible to others in the past 6 months.

The healing protocol that we started on in 2014, is something we should have started many years back. Unfortunately, we didn’t realize that until it was too late.

(Pictures of Bill before and now are at the end of the post.)

In the middle of all the horror, here’s what has HEALED and is GONE:

At one point, I couldn’t recognize “my” Bill. Looking at his face was like looking at a skull. His hands were like a skeleton’s hands. He didn’t even sound like Bill. And without clothes, he still looks like a walking skeleton.

As I mentioned, his body was starting to reject all fluids and nutrients. He couldn’t eat (and didn’t for 3 months) and couldn’t taste anything.

(He hopes to be able to stay out longer as the days progress and do some watercolor sketches.)

The Problem Causing the Severe Pain Still Needs to Heal.

In spite of that, Bill’s attitude is absolutely amazing. He won’t allow me to give up even the slightest bit. He’s determined that we’re going to BOTH come out this better than we went in.

About a week ago, I was so bad off, that he “gave me orders” to start sleeping upstairs again where I could get more oxygen (window open) and could do hot and cold water therapy in the shower each morning to help some of my “new” problems. It’s working and I’m getting better.

He has a bell to ring, should he need me during the night.

Tending and fixing for Bill takes most of my day. Bathing, soaking, nutrients, washing and fixing juices and food, cleaning and everything else. I’m exhausted most of the time, but am improving.

I’ve not been timely with many things I usually do in the garden, but it’s growing nonetheless.

And as you well know, I’ve not written as much on TMG as usual.  But that will change too. And although it might take some time,  I hope to be back in full swing and better than ever in every aspect.   Bill won’t hear to anything less. 🙂

Dear friends, I can’t thank you enough for your loving concern over the past months.  It has spurred us on, encouraged us, and lifted us up.  I hope I can do the same for you over time.

With much love and appreciation,

Pictures of Bill – Before and Now

Below is a picture of Bill taken in September of 2014.  The second picture was taken only 8 months later on one of his first trips outside with a walker. 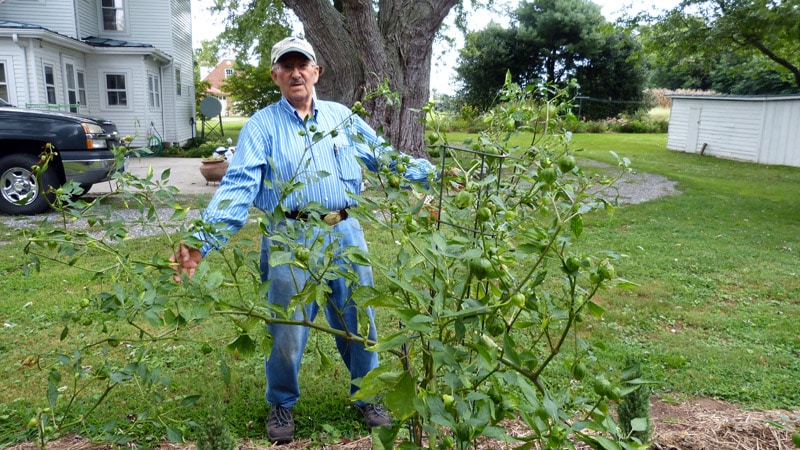 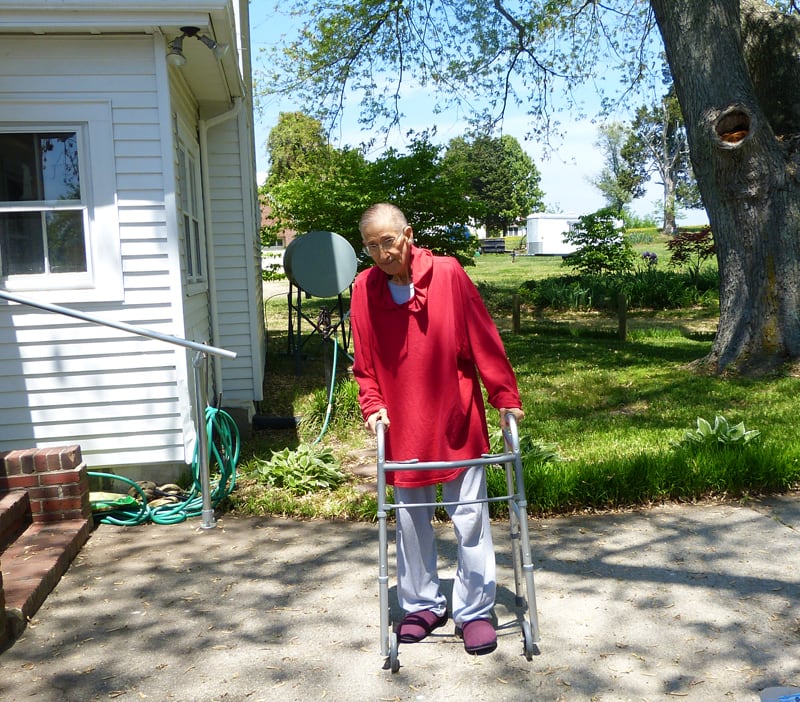