I received a tip from Mrs. Hundley this morning that I thought I’d pass along. (As you will recall, Mrs. Hundley did 7 guest posts for Tending My Garden readers in May and is an ARS  Consulting Rosarian, Master Rosarian and Horticulture Judge.)

She writes in her email, “The roses seem to be holding their own in this heat and dry weather.  I have used a water wand to prevent spider mites.” (The best solution to just about anything is prevention.)

Later, via phone, she told me how spider mitesthrive in hot, dry conditions and can ruin a rose bush (and many other plants) very quickly if they get started.  A strong spray of water can dislodge them and break their cycle.  Spraying the under side of the leaves (where the mites hangout) is critical and a water wand is the perfect tool for this.  The water serves double duty by helping to prevent infestation.

A water wand is a long handled attachment for a hose with a water breaker at the end.  The water breaker breaks the water into rain-like drops providing a gentle rain-like spray that does not harm foliage as can conventional watering nozzles. The long handle permits easy extended reach under and over plants.  It is superior for container plants as well, since it won’t disturb the soil in the pot.

The Water Breaker was the original invention.  After that it was just a question of adding different length handles and calling it a Water Wand or Rain Wand.  The story of the Water Breaker invention is a great American story.

In 1940 a Wisconsin florist shop owner who produced his own cut flowers, saw the need for a nozzle to apply large quantities of water in a soft stream.  His name was John G. Dramm and he invented the Water Breaker nozzle which is now the standard for commercial growers worldwide.

As news about this watering tool spread and requests for the new nozzle were received, Johnny, as folks called him, worked in his floral shop in the day and constructed orders at night.

The business began to expand, but tragedy struck and John G. Dramm died suddenly in 1951 at age 47.

Johnny’s wife, Perdita, struggled to keep the business going.  To earn a living she worked as a school librarian. On lunch hours and at nights she packaged and mailed out orders and attended to all the paperwork and administrative responsibilities of the business.  In addition she parented her two sons ages 12 and 18.

Perdita took no salary from the Dramm Company, but put her two sons through college with the modest profits.

The younger son Kurt William Dramm puchased the Dramm Company from his mother in 1967.

Being a close family, the two companies operated as one.

In 1978 at the age of 45, John Peter Dramm died and the two companies officially became one: Dramm Corporation.

Dramm products were originally designed for professionals, but by the 1970s avid home gardeners wanted to use the same watering tools as the “pros” and the “pros” were all using Dramm.

They are known today all over the world. And the children of John and Kurt still play a vital role in Dramm Corporation.

Kurt’s daughter Heidi appears in many of the life-style photos for the products such as the Dramm Rain Wand shown below which is available online for $17.99. (Regular price is $22.00) The 30″ extension handle is ideal for watering flower beds, gardens, roses, and shrubs, and utilizes the original full-flow Water Breaker nozzle.

Dramm Rain Wand is a tool that makes the perfect gift for most any gardener. 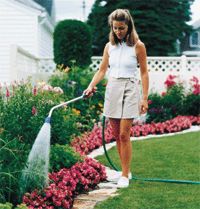