I received the most uplifting email from Pam, a reader of TMG, this morning.  Pam had written to me back in July telling me about her garden and how she had not realized just how important soil is to the success of a garden.

And this year — in spite of all her efforts —she felt she had only produced a buffet for deer. She actually cried.  And I think almost all of us can relate to that.  Working so hard on something — only to have another set back.  Squash bugs are bad enough — but deer!  They’re a lot bigger!

She was so discouraged that she had thought of pulling the whole thing up.  After she told me that she said — “Your blog has encouraged me to keep trying!”

Her email this morning said she is planning and preparing for a successful garden next year. (I wonder if a deer fence is in the plans?)

Another thing that has happened in Pam’s garden is something I think everyone of us can relate to.  She writes: ” I wouldn’t say I’ve had a good harvest overall, but we’ve gotten a little here and there.  Definitely picked more insects than produce! ——-My husband teases me that I’m working on a PhD in entomology. —–I’ve gotten some nice squash (successfully battling squash bugs and and SVB)”

If we are willing to do battle and try our best to hold line — no matter how bad the variables in any given year — we get a harvest.  Here a little, there a little—- but we get it.  Sometimes — day by day — things don’t look as if they’re producing bumper crops — but as the years go by I think you will continue to be amazed at how much produce you get even in those years. And it’s better than anything we can get anywhere else.

Pam continues: “I’ve been meaning to write to you and let you know how much your blog has helped me. I  appreciated your “confession” about losing so many squash plants and sharing your method of back ups and starting over.  I lost a couple of plants completely and nursed a few through the onslaught of bugs.

It just didn’t occur to me that I could start new seeds in July. I thought it would be too late.  I’m happy to say that I replanted seeds in another corner of the garden, pulled up the first plants when their production slowed (and left them there for a while as a squash bug trap),  and now have a couple of young, beautiful plants that I’ll start getting fruit from today! ”

As I have mentioned several times in past posts, I lost 16 —- yes, 16! — squash plants to the SVB this year.  And I had numerous squash bugs when the season started. (Much better now.)  It really was looking like I wasn’t going to get squash this year. Finally — like Pam — after transplanting more squash to the garden the middle of July —- I have been getting squash for a week!   Yeh!

Only one yellow squash made it, but is giving me squash everyday.  And a couple of Zuchetta squash — a vining zucchini-like squash- also made it.  I don’t have a picture of the fruit.  Bill missed seeing it when he took the pictures this morning because he was hurrying before the downpour of rain.

They look like a big horn.  They really are delicious and taste like zucchini.  I read somewhere that I can leave them on the vine and get a winter squash that will keep a while.  I might do that at the end of the season. 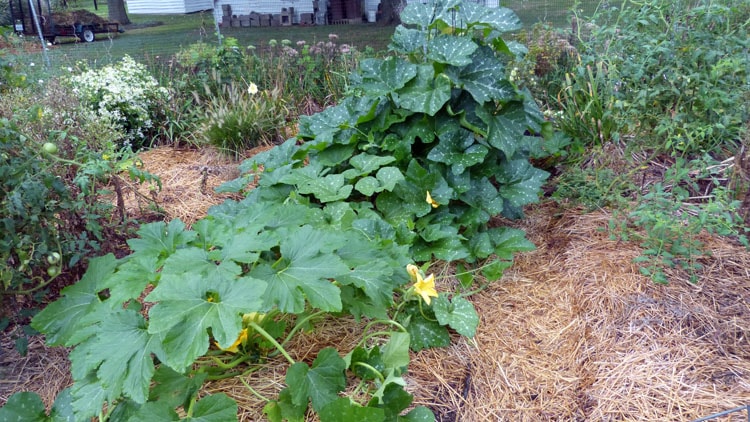 The one yellow squash plant is in the front. The one with the white in the leaves is Zuchetta squash. The blossom that is open belongs to the Zuchetta. 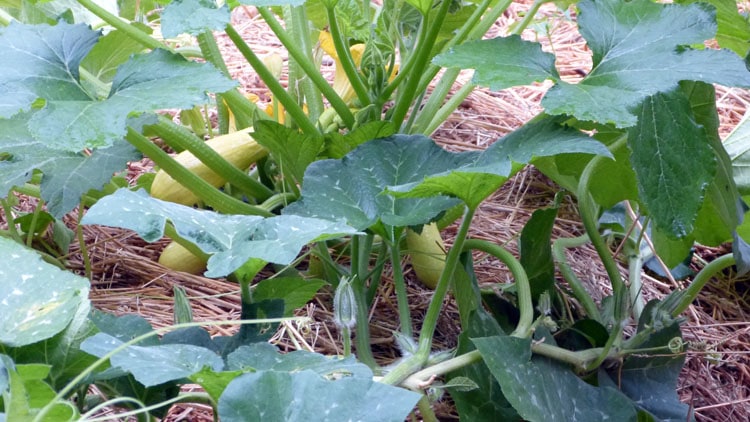 Here’s a close up of the yellow squash. I’ll have to go out in the rain and pick those. Can’t believe here it is the end of August — and I’m just getting squash!

Pam had something else to say that I was very glad to hear.  She writes, ” I was particularly grateful when you posted a picture of your mid-summer garden.  I was looking at my garden in July and comparing it to your garden pictures in my mind and thinking “oh my”.  It was refreshing to see that a garden should look different in July.” (emphasis is mine)

And that is exactly why I try to put up pictures at various times to show you that as with everything — the garden is beautiful in its own time — but is constantly aging, growing and changing.  The May garden with it’s fresh lush beauty is my favorite to look at in pictures —- but there is a beauty to the late summer garden that is comforting and rewarding.  It’s just different.

Bill is standing at the entrance to my garden in the first picture below.  That tomato branch you see on the right hand side is an Opalka tomato that is planted immediately to the right as you walk in.

They are not producing fruit.  As delicious as they’re suppose to be — I can’t allow them to take up all that room and not give me tons of tomatoes.  I have four Opalkas total.  All those — and only 3 tomatoes so far!!! Won’t grow them next year. 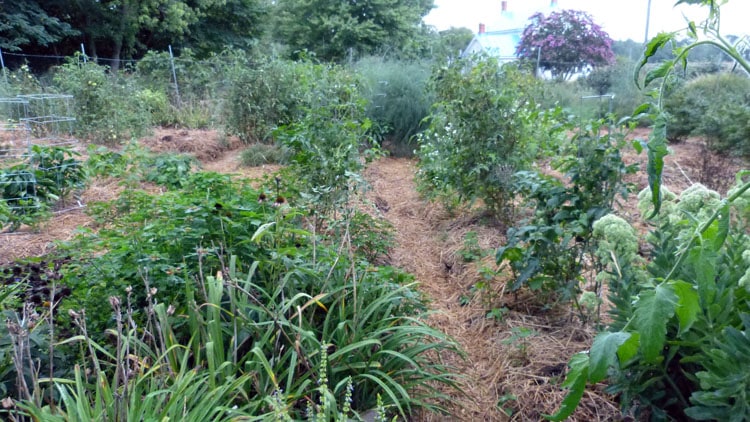 Standing at the entrance to my garden. Blueberry bushes are to the right.  You can see asparagus fronds, tomatoes, peppers, buckwheat with its white blossoms, and rows that look empty – but are storing my potatoes, and of course tomatoes. Also perennials that are finishing. 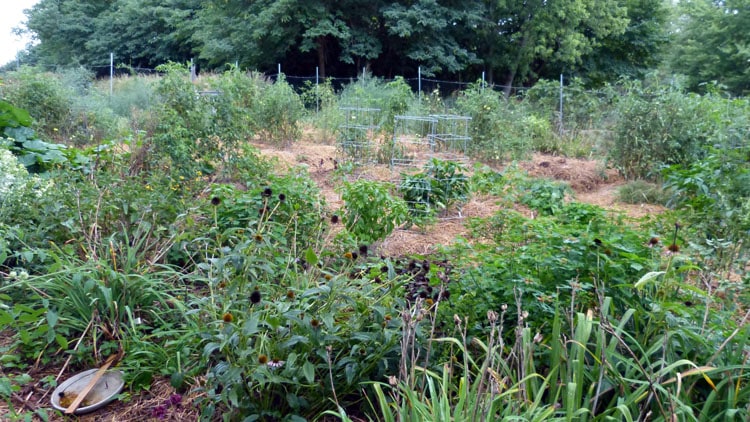 This is also at the entrance, but looking to the left rather than straight ahead.  On the far left side of the picture just above mid way you can see those huge leaves of the Zuchetta squash.  Also visible is basil, peppers, tomatoes, asparagus frons.  Lettuce is to young to show. My beautiful Diva cucumber was pulled out last week.  I miss it.  the dish and stick at the bottom left is for the bees to get on to get water.  It had just rained so it has debris in it right now.

Blight, Mulch, and Insects – A Question

Pam had a question for me that I feel was a very important one.

She asks, “When I start preparing my beds this fall, should I remove all of the straw that I’ve used for mulch?  I’m thinking that with all of the trouble I’ve had with insects and blight I should probably just get rid of it, but I hate to waste it.  If I used your method and put it deep in the soil, would that kill anything that could cause me trouble in the spring?”

I am working on a post right now that will answer that in detail. It will take me a while to finish it. Please be patient.

Organic Gardening is easy, effective ,efficient — and its a lot healthier.