If you’re an old hand at gardening you still might find this story interesting even though you probably already know about snow acting as a blanket for plants.

This winter has been extremely mild.  I’ve started transplanting to the garden much earlier than normal. My gut feeling tells me it’s worth the chance — even if we do get a bit more cold weather.

It snowed Monday, March 5th and a reader wrote to me: “It’s getting down in the 20’s tonight.  I hope my winter sown things will be ok!  You worried about yours?” 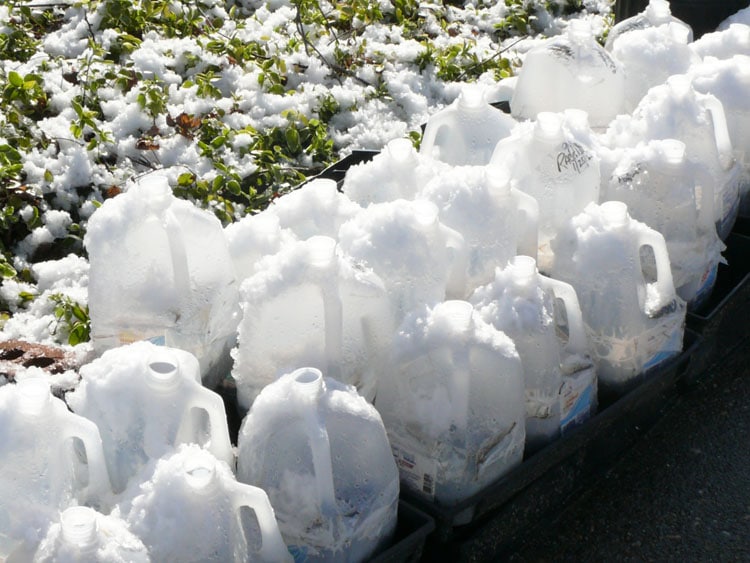 Some of my winter sown jugs with snow in freezing temperatures.

I shot back an answer saying:

“No – I’m not worried about the winter sown things.  I think the jugs will protect them. They’ve been through the low 20s before and I think yours have too. The forecast  called for 31 degrees tonight and then today they changed it to 26 degrees.  Had I known this yesterday, I probably would have covered my seedlings in the garden. BUT — I think with this little blanket of snow over the lettuce, other greens, spinach, turnip, and pak choi seedlings — they’ll probably be fine and protected. ” 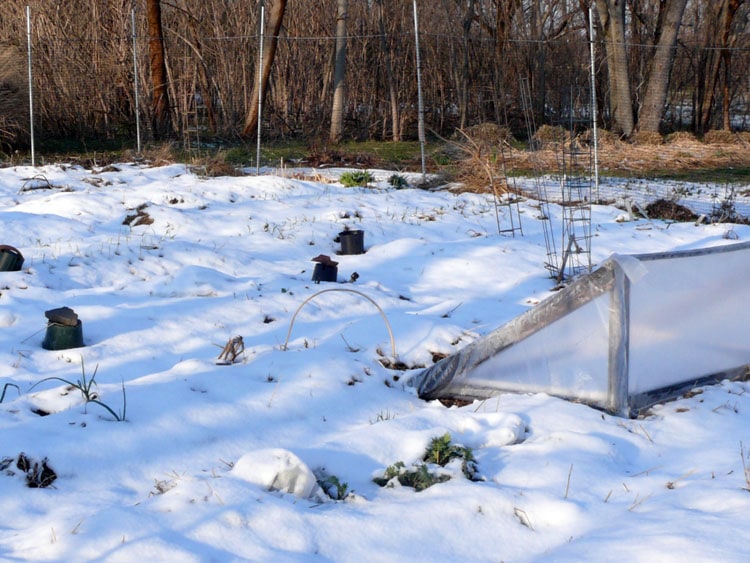 March 5th garden is covered with a blanket of snow. Traps are set for voles under the black flower pots. Cold frame lies upside down. I had removed it from the lettuce because of the warm weather. Under this blanket of snow are all kinds of various seedlings. Temperatures reached 25 degrees this night and the next day by noon all the snow was gone.

Much to my surprise she wrote back and said she was “so confused “and also indicated that her husband didn’t understand either.

She further expressed her “confusion” with a number of questions:

I’m sure there are folks in this world that would love to answer her questions in page after page of detail.  I’ve never seen a reason to even want to know the answers in detail.  It’s always been enough for me to see that something exists in nature and then work with her plan.

What’s a blanket of snow?

A blanket of snow is just that.  A blanket, a covering, a surface accumulation of snow that serves to protect and water the underlying plants.  In most cases, it insulates, protects and keeps plants under it “warm”. I don’t know all the technical aspects of how nature does it.  I just know that’s the way it is.

Rules of Thumb to keep in Mind

If you’re a new gardener watch the forecast so you can protect your seedlings if necessary. And keep these rules of thumb in mind:

In case you’re a “seeing is believing” person, I’ve included numerous pictures. Temperatures reached 25 degrees during the night after it snowed. The next day by noon all the snow was gone. The plants and seedlings looked beautiful. 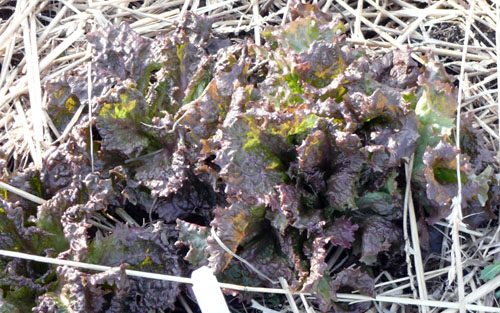 Wintered over lettuce that was covered by a blanket of snow the previous night in 25 degree temperatures. 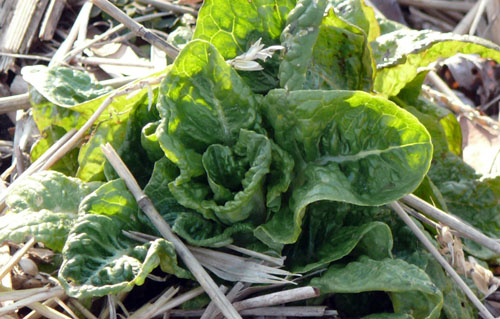 Wintered over lettuce covered by snow the night before the picture was taken. 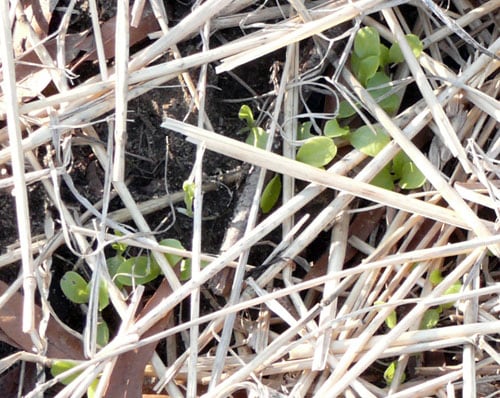 Black Simpson Lettuce seedlings come up from a direct seeding into the garden. Snow blanketed them the night before the picture was taken and protected them from the severe cold. 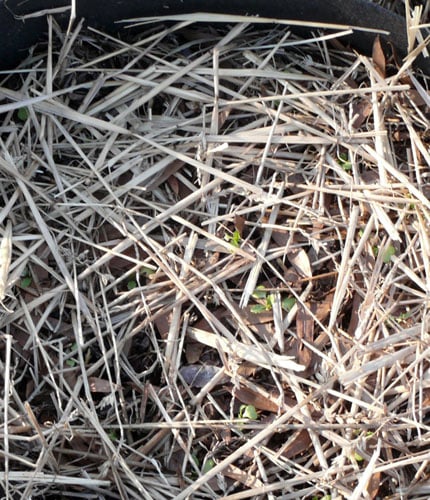 These winter sown Japanese turnip seedlings were transplanted to a grow bag. They were covered with several inches of snow the night prior to taking the picture. They're still small but doing fine after 25 degree temperatures. If you look closely you might count the same 10 I counted. 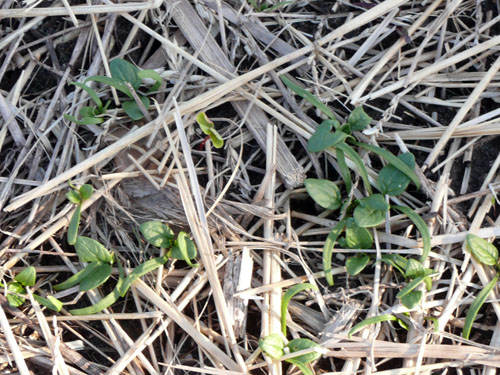 I sowed this spinach directly in the garden back in January. Last night it was blanketed with snow which was gone by today at noon. It was there long enough to protect the seedlings during the night's severe cold. 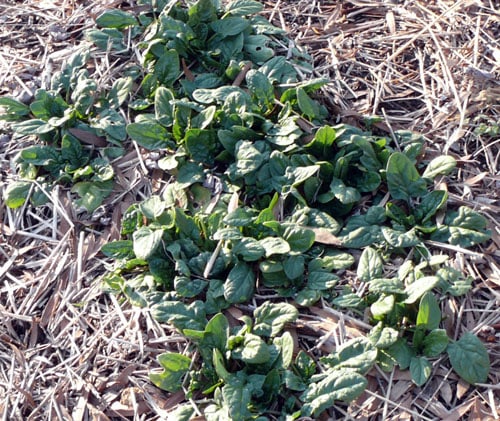 Over wintered spinach growing close to the direct seeded spinach. 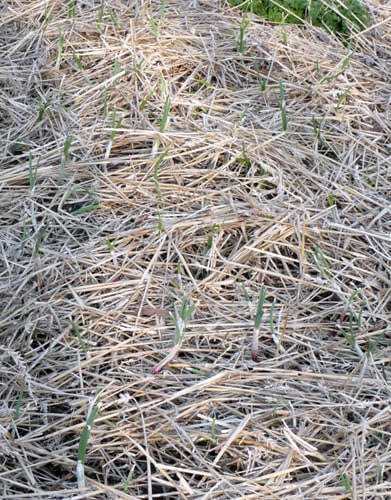 Onions transplanted in the garden in February. Their blanket of snow melted leaving them looking great. What remains after picking parsley all winter is in the upper right hand corner of the picture. 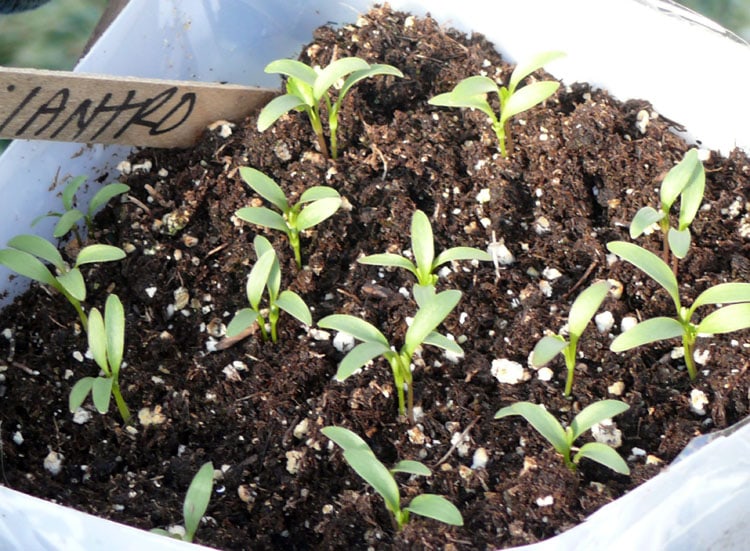 This is cilantro that was winter sown. I had removed the top part of the jug in anticipation of transplanting these seedlings last week. I got sidetracked and never got to transplant them. During the 25 degrees they were only partially protected with the jug top. They looked beautiful today!

If you pay attention to what nature usually does, it can save you a lot of time in the garden.  Had I not known that the blanket of snow would protect my hundreds of seedlings, I would have had to spend some time covering them with row cover fabric or my cold frames.  I was glad not to have to do that.