My starting point for growing tomatoes in any year is my favorite tomato – Big Beef.  NOT the hybrid, but rather the open pollinated Big Beef that was dehybridized by Gary Ibsen and is available only through Tomato Fest, as far as I know.

Years ago I’d buy seedlings from a local stand. Then I started growing from seed. Then some years back Monsanto purchased the company (Seminis) that had created the hybrid Big Beef. I was devastated, but I knew I was NOT going to buy seed from Monsanto.

Thus, starting with seed saved from the best of my hybrid crop of Big Beef I started the process of dehybridizing. I was surprisingly successful. (Seed from hybrids don’t necessarily produce fruit the same as the parent.  You might get something good; you might not.) But, in the meantime I found out that Gary Ibsen – who’s been “THE tomato man” for almost 40 years, had already dehybridized Big Beef.

So I have my seed and his seed always on hand. And in most years I grow both with the same success.

Even though I try new varieties each year, I go heavy on the open pollinated Big Beef. It’s dependable, produces heavily, and tastes great. And if you’re selling tomatoes – especially to folks who are programmed to want only perfect looking fruits (almost everyone) – your Big Beefs will be a hit.

Heirloom can have several definitions. (Gary Ibsen explains them well in “What is an Heirloom Tomato?” on the Tomato Fest website here.)

The main thing to remember is that they’re open pollinated which means you can save the seed and it’ll produce fruit identical to the parent.

There are 2 main reasons why I prefer open pollinated  and/or heirlooms rather than hybrids.

#1 – Heirlooms (and/or open pollinated varieties) have more nutrients.  I gave more details in my post Garden Seed – Heirloom or Hybrid – Information to Help Make the Choice.

#2 – Heirlooms provide tremendous diversity. Diversity is one of the great principles of nature.

Many of these varieties that have come down through the decades or centuries are inherently resistance to pest and diseases. They’ve adapted to specific growing conditions and climates.

They help to insure the genetic diversity necessary to keep the human race fed.  This multitude of heirlooms is being replaced by just a few hybrids that are primarily bred for commercial purposes like shipping, shelf life, and looking perfect. Sounds like a recipe for disaster to me.

I’ve written about Gary Ibsen and his partner Dagma Lacey, owners of Tomato Fest, in a previous post.  As I mentioned then, if you can find more of a selection for heirlooms, I don’t know where it would be. They offer over 600 heirloom tomatoes.  And right now they have a sale on until January 18, 2016.

When you choose a new variety of heirloom tomatoes, it would be great if you already knew how it would perform in your area. A little research may reveal where the heirloom originated. If so that might give you a better idea of what conditions might be necessary for top performance.

But chances are, we won’t know how it’s gonna do in our garden until we try it.

As you’ll see in my reviews that follow, I’ve disliked a lot more varieties than I’ve liked. BUT, when you find one that’s great for you, it’s worth the time and effort put in. And even then, there are many variables from year to year that will effect performance even with your favorites.

There’s always varieties that don’t show traits that I’d want to bother with again. And then others,  although they may not have performed particularly well, showed me various traits that might be worth giving them another try.

Suggestion: When trying new varieties, don’t depend on them for your main crop just in case they don’t do well. I plant one to three plants of a new variety depending on available space. If it doesn’t do well I still have a great crop from my tried and true.

This late season heirloom was not as productive as I had hoped for, but the four plants gave us enough fruits that we were not without one after they started ripening until frost.

Cherokee Purple is an heirloom from Tennessee and was cultivated by Native American Cherokee Indians.

Production was a little more than Cherokee Purple.  Fruits can be large or small depending on the variables.  As the season progressed catfacing disappeared and perfect “bottoms” became the norm.

(The imperfection known as catfacing is usually caused by a drop in temperature <below 50º> when the plants bloom and begin to set fruit. Some varieties are more prone to catfacing than others. )

It’s now a favorite and must-have in my garden. I keep it basically in one area since it readily self seeds and I don’t have to save seed.

Another thing that I really like about Matt’s Wild Cherry is its frost resistance. It was still going strong when others had succumbed to the frost. A real season extender.

Bill loved Matt’s Wild Cherry and use to snack on it as he would walk around the yard. And you can value his opinion on taste more than mine since Bill had the gourmet taste-buds. He’s the one who always had the last word about what tomato taste good enough to justify taking space every year.

A good friend and reader (you know her as Farming Bear) says Matt’s Wild Cherry is one of her children’s favorites (as well as her chicken’s favorite).  She  agrees that it’s a heavy and strong producer, needs no special care, and will grow just about anywhere.  She suggest that it’s “perfect for little ones to have all to themselves to tend.”

Although I’ve never tried this old German heirloom tomato, Farming Bear’s recommendation makes me want to.  She writes, “it will prove to be the Hercules of your tomato plants. When all of your other tomato plants have tired out, this one will stand fast and strong” (along with Matts Wild Cherry).

“The yield on this plant is amazing! Riesentraubes are a small tomato (1 ½”) but they are well worth the investment of time in picking. And, although small, the flavor is surprisingly robust.” She calls it her tomato insurance policy and one she would not do without.

An Example of Different Results

To show you how different heirlooms can perform from one garden to another even in the same general geographic location, here’s Farming Bear’s review of Druzba:

“My all time favorite hands down. This is a plant that just seems perfectly at home in my back yard. It is the most delicious tomato I have ever put into my mouth. My husband who, ironically enough, doesn’t even like raw tomatoes couldn’t believe how delicious this variety was. Druzba, a Bulgarian heirloom, is extremely reliable and offers a high production. The fruits are uniform and require no fuss. I have never had one Druzba that wasn’t perfect from my garden.”

7  Varieties that I Won’t Grow Again

I just placed an order with Tomato Fest and these are the new varieties I’m growing this year.  I’ve noted beside each what it was in the description that made me want to order:

What are your favorite tried and true varieties that you wouldn’t be without?

What new variety are you trying this year in the hopes of finding another winner for your garden?

Think tomatoes.  It won’t be long before it’s time to start our seed. 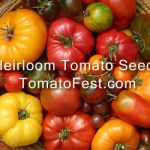 All content including photos are copyright by TendingMyGarden.com.  All rights reserved.