From my own experience as a new gardener 37 years ago, the questions I receive from readers, and comments I see on various forums, it seems that even “organic” gardeners turn to chemicals (but one approved for organic use) when something goes wrong in their gardens – be it pests or disease.

Why We Do What We Do

Our beliefs have the biggest influence on our actions. The belief behind the action of reaching for various chemicals (whether organic or not) is usually that it will be the easiest, quickest, and most efftive way to solve our problem.

What we often don’t realize until we think it through, is that our belief has been influenced (programmed) by advertising and often has nothing to do with truth or facts.

Once we realize where our “belief” comes from we can start questioning it and asking ourselves if there is way just as good or better that works with nature, is not harmful, and doesn’t even require a purchase.

Falling for the Hype

As regular readers know, I started gardening in order to have something to eat. Needless to say I didn’t have money for purchased “organic pest controls”. My poverty served me well on that account.

But at times when we were making a little money, I still fell for the advertising that indicated this or that organic spray was just what I needed to be rid of whatever problem it was that I was having. If I had the money, I had to have it.

What I realized over time was that I only really needed a tiny amount of what I had purchased.

as it did to use other methods that required absolutely nothing but me in the garden. And the more simple methods always seemed more effective as well as less time consuming in the long run.

As I’ve mentioned previously in posts, I’m embarrassed to say that I have bottles of Pyola and another product I can’t even remember the name of, sitting unopened for more than 10 years.  I gave into that “this is just what you need” advertising when I bought them and then never used them for the reasons given above.

These beetles are probably the most dread insect defoliator of potatoes.  (They can also do damage to tomato and eggplant which are in the nightshade family of plants.)

Adults winter over in the soil and those who research these beetles have found that some of the adults can spend two years in the soil before emerging.

One female can lay 300 to 800 eggs!  The larvae are able to move and spread out over the plants and can eat a lot. Left unchecked they can destroy the entire crop.

My Experience with Potato Beetles

Over the years, I’ve had more than my fare share of Colorado Potato Beetles.

My main method of control has always been hand picking even back years ago when I was inundated with hundreds and hundreds of beetles.  When we first moved to this property (home of my second garden), I was again inundated with beetles the first few years.  After that, the number was sparse.

In the spring when potato foliage first starts, it’s easy to check for beetles and their larvae as I tour the garden.  I usually find one on a few small potatoes that have sprouted in an out of the way place such as a path.

I guess those first beetles are ones that over wintered in my soil. After that I don’t see any for several weeks and then I’ll have another small flurry of beetle activity.

As the summer goes on I find an occasional one here and there. 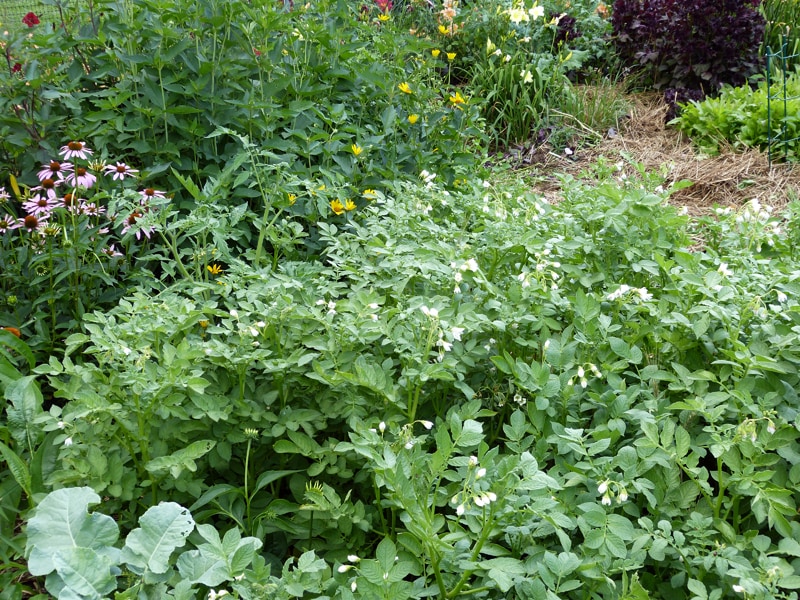 A bed planted with Butte potatoes from Wood Prairie Farm. As of this writing July 25th, I have found only 2 potatoes beetles. (Of course I killed them.)

He and his wife, Megan, have owned and operated Wood Prairie Farm in Bridgewater Maine for 35 years. Their farm has been MOFGA-certified organic since 1982. Jim focuses on producing organic early generation Maine Certified Seed Potatoes, seed crops, vegetables and grain.

The Gerritsens sell through their mail order catalog and their website (wwwwoodprairie.com). In addition they sell wholesale to several national mail order seed houses.

Another Grower Asks Jim for Advice on Potato Beetle Control

I got the most recent newsletter via email the other day from Wood Prairie Farm. A potato grower had written to Jim for advice on control of the CPB (Colorado Potato Beetle). He had been spraying with bullseye (spinosad based) and copper soap. (Just for the record on where I stand on that: spinosad kills beneficials too and is not something I would use; nor is copper soap.)

The grower went on to say “Until last week we would see only a CPB or two in our five rows totaling 250 feet. This morning, after that horrendous storm, there were hundreds of CPB in every stage, instar and adults.

—I am perplexed, and wondering what you do for CPB. There were too many nymphs to hand pick this AM. —“

“One year in the 1980s when CPBs were horrible we had a double row of potatoes isolated from the rest which was 300′ long. I was determined to control them ONLY by picking and crushing. I was out there 2x – 3x/week. It was a battle, but I won. That proved to me manual control can work on a scale of up to 500-600 row feet. “

I hope you found Jim’s success as encouraging as I did.

Giving the Grower an Option

Jim gave the grower options in case the grower felt his situation needed something extreme. Thus, I felt I had better include the rest of his answer in this post.

He continued, “As to purchased organic inputs here are three to consider in your extremity:

Many of our beliefs are programmed.  No doubt about that.  But I hope you will join me in thinking it out when you next desire to reach for a chemical, even if it has been approved for use in organic gardens.

You might just find like I have over the years, that working with nature doesn’t require purchased inputs and is just as effective, if not more so. 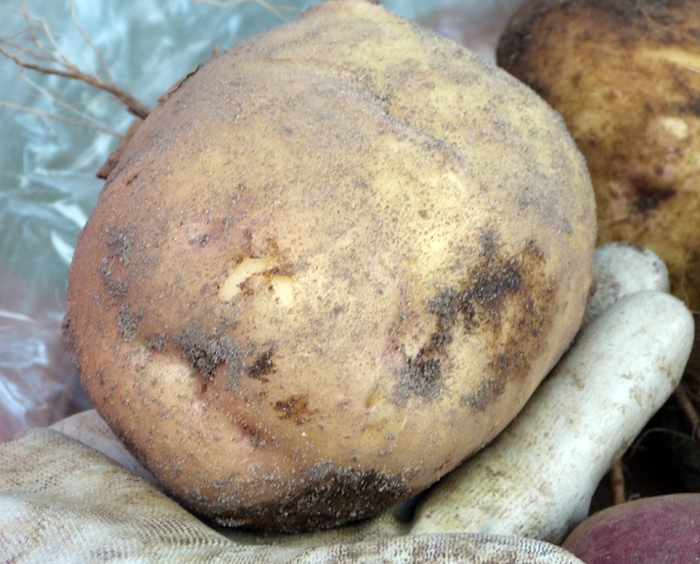 Organic Gardening – Tempted to Give it Up?

Bugs and/or Disease in Your Organic Garden Got You Down?