Several years ago, after a major exhibit of Bill’s newest paintings, he was asked to speak to a group of home schooled children.

Since I would introduce Bill to the group, I wanted to say something brief, but significant that would perhaps help these children should they want to accomplish great things outside the boundaries of what others thought acceptable.

After briefly telling them that it took many years for us to be able to make a living with Bill’s art — I told them the following:

You can do anything in life you want to do but you have to accept two things in doing it:

On a cheerier note, somewhere along life’s journey you’ll find someone who reaches out their hand (in one way or another) and encourages you to keep on keeping on.

How it Happened with Us

When we first came to this area in 1978 we came with $80, a little dog, and everything we owned in a truck that belonged to the bank in Baltimore. And to make it even more absurd to any “on-lookers” – our reason for moving to this then-even-more remote area was because we loved it and Bill wanted to paint what was here AND earn our living from art. It didn’t take a genius to see that we were in for a rough road.

The first winter was a taste of what we would experience for many years and it wasn’t easy.  Nor did it get any easier for more than 20  years!

During that first winter Betsy appeared at our door from nowhere.  She came to buy a package of notepaper from us — and I never have figured out how she even knew we had it.

After that she would show up every now and then. The friendship progressed and grew. She cheered us on. She seemed to recognize Bill’s potential and what he had to offer the world — or at least our part of the world.

She was there when we first started to garden and knew how I loved it. She also knew that I couldn’t buy any flowers. At first she shared some of her beautiful spring bulbs with me that I still have today.  Then she shared a beautiful old fashioned rose with me.  She started the plant from a cutting. It’s thrived at both our previous garden and our current one for almost 30 years. 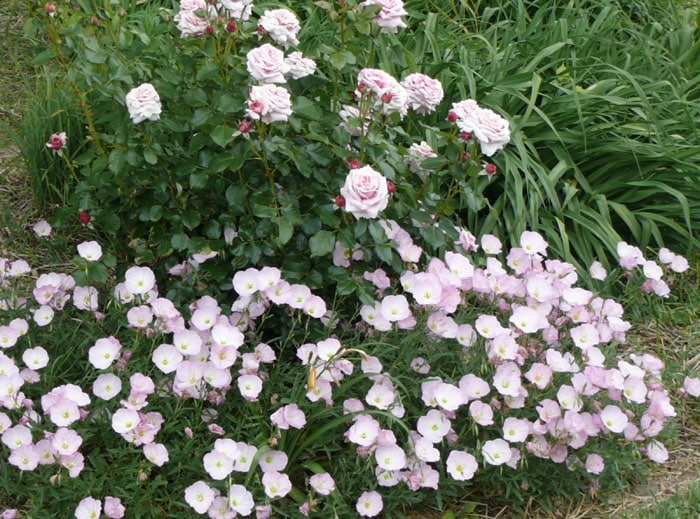 The rose Betsy gave us is shown here with pink oenothera at its feet. 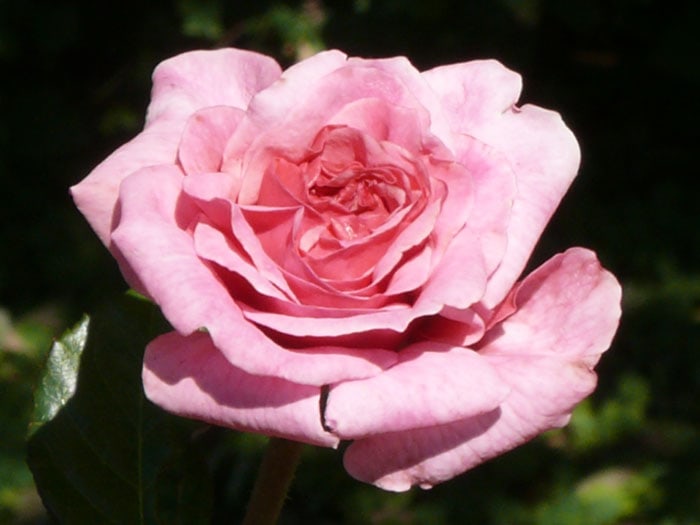 The blooms mature quickly, but they're gorgeous and smell soooo good.

I remember the day she came over to tell me that she had ordered a gift from Park’s Seed for me.  It was a “grab bag” of 5 daylilies. I planted them the minute they came.  Over 150 varieties currently grace my garden, but those 5 lilies remain among my top 10 favorites. 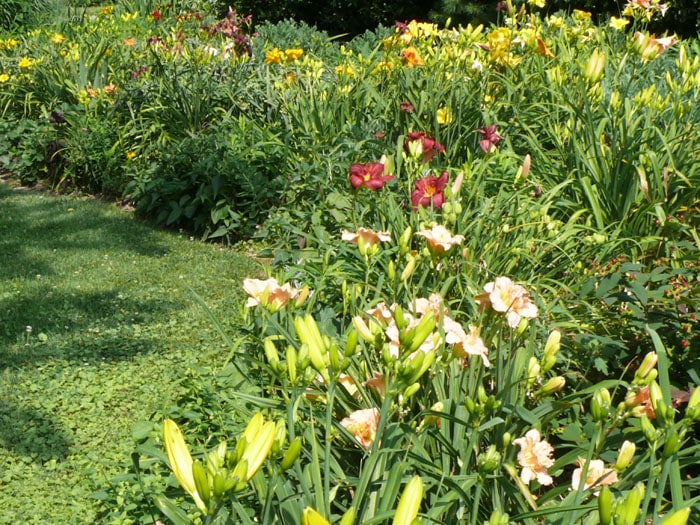 This late June border has many of the yellow lilies that were from the original 5 in the grab bag. 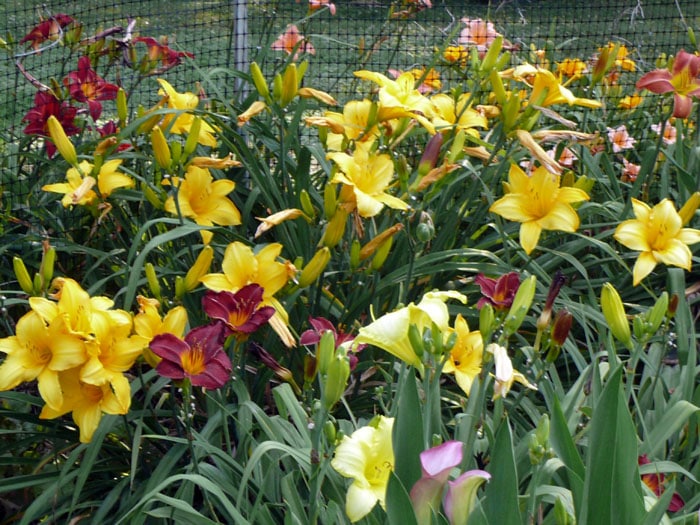 This gold-yellow and the lemon yellow are among our favorites originally from Betsy's gift. Also the red in the upper right hand corner is from that gift.

Some years she’d tell me to pick something that I especially wanted out of a flower catalog. Then she ordered it for me or would give me the money to get it.  It was like Christmas in spring time!

Over the years we met her son, her grandchildren, and her great-grandchildren and others that were included in her extended family. Betsy became as dear to us as if she were a beloved Mother or older sister.

Her only son, Bruce, instantly shared the enthusiasm his Mom had for what Bill was doing.  In only a short time we embraced Bruce as a brother and his children as family.

Bill and I were married 47 years on November 6th.  Betsy died November 7th at almost 95.  Believe it or not, it was totally unexpected! But then — you’d have to know Betsy.

I feel her absence more with each passing day. I’ll be glad when spring comes again, when she’ll live in my garden, cheering us on as she’s always done. 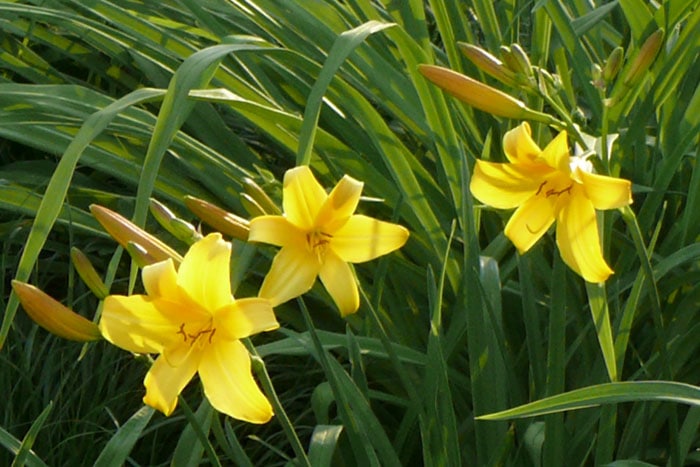 After a lot of research I think this may have been a lily brought over by the pioneers of this country. It blooms in May long before regular day lilies bloom. The foliage stays beautiful long after the blooms are gone. I named it "Early Betsy" when she first gave it to me many years ago. 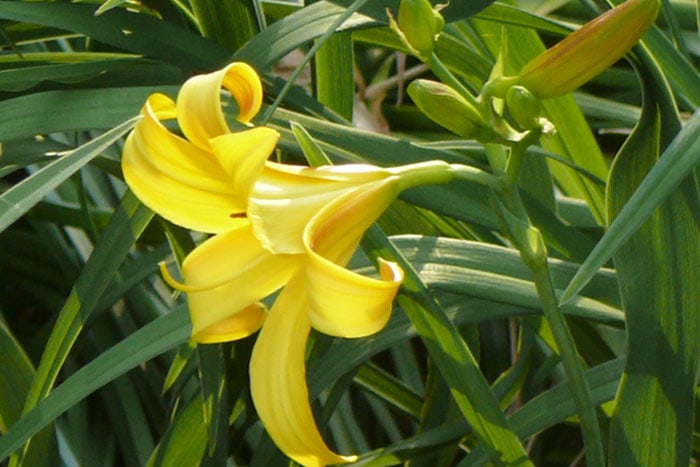 The goldie-bronze strip on the outside of the blossoms are unique to this lily. 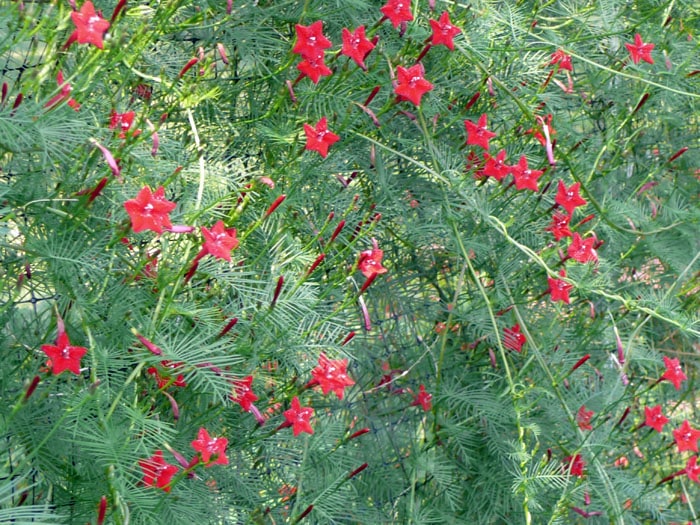 Betsy always kept this lipstick vine in a hanging pot. That's probably the best place for it since its very invasive. Nonetheless, I have it outside in the borders in front of my food garden. It would literally pull the fence down if I left it unchecked. But it's so beautiful and I love it. Now, more than ever, it reminds me of Betsy.

“What you leave behind is not what is engraved in stone monuments, but what is woven into the lives of others.” Pericles.